The first cruising family I met was the Young Bohemians.

She was a wafer-thin Spaniard with a delicate, lilting voice. He, a dreadlocked Brazilian with the same bright eyes she had. Together they had a two-year old boy.

She had given birth to the boy right there in the boatyard. And it was as if he had inherited the best qualities of the place.

The boy was a tinkerer. He would amble up and down the wharf in search of some object to play with—out of the reach if not the watchful eye of his mother. His mission took him up the sandbanks. Past the shipyard strays which he terrorized. Into the gutters and canals and back to his parents arms again.

If you said hello, the boy would stare at you with these big blue eyes before suddenly departing.

He was shipyard royalty. Prince of the wharfs.

So it was especially tragic when, six months later, on another island, in another shipyard, we heard that the Young Bohemians had gone missing at sea.

They were on their boat’s maiden voyage. An inter-island passage that should have been, at most, a 24 hour sail.

Now it had been 38 hours since they were last sighted.

We shared pictures of their boat hoping that someone might recognize it. Perhaps they slipped into a harbor unannounced—fell asleep after a grueling passage, omitting the necessary immigration procedures, and causing a bit of a stir.

But it wasn’t so.

The Young Bohemians had bought their boat in Trinidad. A fixer-upper that they elected to fix themselves. Occasionally, I’d hear that the transmission failed such that they could not put it into reverse. Or that a crucial part fell into the water and they were in search of a dive tank and a good pair of goggles. The misadventures of committed DIY’ers.

It’s not quite as funny when that same vessel goes missing at sea.

There’s not much to do when waiting for someone to arrive. You notify the local authorities. Hassle them, if necessary. You speak with mutual friends. Ask whether they had tracking aids—AIS, GPS, satellite phones.

You look at the weather and come up with benign explanations for why they might be delayed.

But there’s nothing more to do other than wait for the boat to arrive. Or not.

So, 44 hours later, when their boat limped into a port on the south side of island. A whole community of cruisers breathed a sigh of relief.

But everyone was safe. Above all, that sweet boy was safe.

You laugh. You cry a little. You think about the gamble we all take whenever we leave port. But in the end you raise a toast to the family that Neptune spit back and praise the little boat that carried them to safety.

The next time you leave port, you think of your family and friends. How they have no way to know exactly where you are. Or exactly what you are going through. You think about the fact that all they can do is trust in you. Trust in you to show up with a great story. Not to disappear willingly into the night and never return. 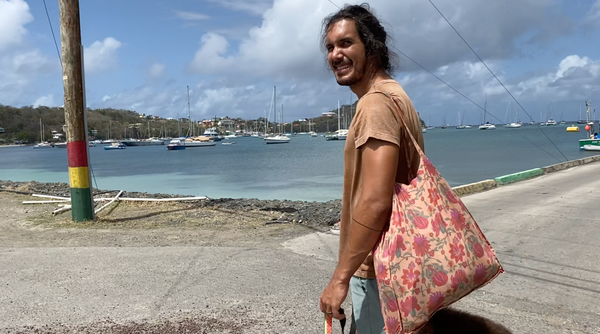